Zoe had four birthday cakes. This is quite shocking for a family that claims to be following a low-sugar diet. It was quite accidental. Honest. 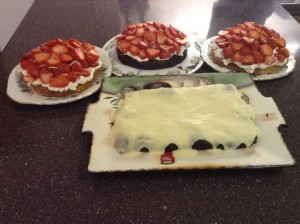 On Thursday evening I baked a lovely dark chocolate brownie cake for Zoe to take into nursery on Friday. I wanted to make it dairy- and gluten-free so that one of the nursery workers could have it. When it came out, it was a delicious rich bitter chocolate cake: lovely, but it really needed a white chocolate and cream icing. And we didn’t have either in the house. And even then it wouldn’t really have been a suitable cake for babies. It was just too grown-up.

So there I was at 9pm on Thursday night, baking a second chocolate cake. It took me a while to find one that used the ingredients we had in the quantities we had them, given that I’d put most of our cocoa powder in the first cake. But I found this recipe for a chocolate fudge cake which looked nice (giving up on the dairy-free bit) and made it. Actually Robin finished it off because Zoe needed a cuddle and wouldn’t let go!

So I took that cake in with Zoe to nursery. And brought it home again, because they weren’t allowed to serve it because it was home-made and they didn’t know what was in it.

Meanwhile, I had been baking the cake we always intended to make for her birthday party: a standard vanilla sponge cake, topped with mounds of cream and delicious strawberries! And instead of making a sandwich cake we made it into two separate cakes.

We did the white chocolate icing on the grown-up cake, and did the same strawberries and cream topping on the chocolate fudge cake.

They were all delicious.

The nursery cake was the best of all, so that worked out well in the end.