Apart from Mamamamamummummum and Dadadadadadaa, which she’s been using for some time and is increasingly directing at the appropriate parent, Zoe’s first word is ‘ta’, for thank you, correctly used in the context of receiving something she wanted. This morning she also made a good stab at ‘Grandma’ – ‘namnya’. 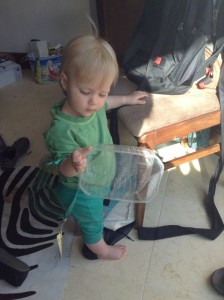 Zoe has apparently made a deliberate decision, now that she can get about quite efficiently by crawling and see a lot more by pulling up and standing, to concentrate on developing her communication. She is very consciously watching me when I sign and attempting to imitate me. She’s even practising in front of the mirror! (And yes, that implies she knows exactly what a mirror is. I don’t know for sure whether she actually does or not. She doesn’t attempt to wipe dirt off her face but maybe that’s just because she doesn’t care.) For a while she thought that all signs involve the opening and closing of the hand, but she’s getting clearer and clearer. At first it was obvious that she was forgetting them and then remembering when she saw me doing them, but now she’s signing independently.

She’s very into animals, and we’re getting a lot of animal noises as well as signs (mostly ‘duck‘ and bird‘, but also ‘cat‘ and ‘dog‘. A surprising number of animals apparently go ‘eeh ah’ – I think this comes from a wild animals book in which the chimpanzee goes ‘ee ee ah oo’. MMMmmm or MMmaaa is usually an attempt at ‘miaow’, but might also mean ‘brrugh’ (elephant) or ‘roar’ (lion or tiger). We’ve had ‘uh uh’ for ‘woof woof’ too. And everywhere we go she points out birds with ‘djaa’ (‘kyaaa’ for seagull or ‘caw’ for crow), ‘mmm mmm’ (‘coo coo’ for pigeon), or ‘djee djee’ (‘tweet tweet’ for everything else).

A couple of weeks ago I took her to the park and while she was in the swing she made an attempt at signing ‘cat’ (which she does by doing a sort of bird sign across her mouth). I looked round and she was looking at a Scottie dog which had just been released from a car nearby. But now she’s getting better at distinguishing them and can certainly correctly identify dog-shaped dogs like Labradors quite consistently.

She’ll be a year old on Saturday. Where does the time go?

One Response to "And Zoe’s first word is…"