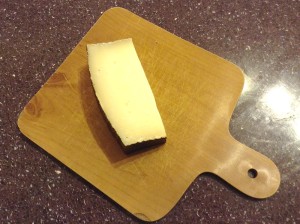 In honour of Zoe’s fourth-month birthday, on Tuesday, I attempted to start reintroducing dairy to my diet. (For those of you who haven’t been following along, I gave up dairy in about month five of pregnancy as it was making me feel ill. After Zoe was born I tried reintroducing it: I was fine but Zoe was not!)

I started with a sliver of Manchego cheese. Being cheese and being made of sheep’s milk, this would present Zoe with a very mild challenge. I ate it after dinner on Tuesday evening.

She was fine that night, and fine the next day. She got a little grouchy towards the end of the afternoon. Then the evening was terrible: she just couldn’t settle. Eventually at around quarter to eleven she stayed asleep long enough for me to go to the loo. Then I went to bed. Zoe continued to be somewhat restless.

But I don’t necessarily blame the cheese. She was sniffling a lot so I suspect a blocked nose. She’s also been drooling copiously (and blowing some prodigious bubbles), and gnawing on my fingers, so she is probably teething too.

Today she’s better, though understandably tired. I’ll wait a few more days until she seems to be fully recovered, then try again with the cheese.

One Response to "First dairy attempt"