You are here: Home › Zoe › The social whirl

On Monday afternoons, Zoe and I go to a breastfeeding support group. There’s usually only a couple of us there, which means it’s a good quiet chat. Zoe definitely recognises the regulars! 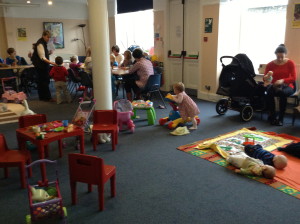 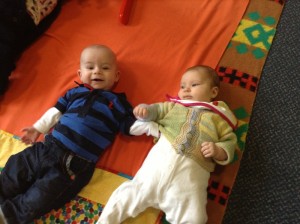 On Tuesday mornings, we go to Buggy Club at our church. It’s mainly for slightly older children, but there are several other babies as younger siblings. There’s a great atmosphere and some lovely folk.

If we didn’t go to Buggy Club, alternatives include a baby massage class and a parent and baby group run by the Salvation Army.

On Wednesday mornings, there’s another breastfeeding support group, held at the library. Or we could go to Rhymetime, also in the library; or there’s a baby swimming class; or another baby group.

Thursday mornings we’re not currently going anywhere. But there are two 0–3 groups in different places that we could go to if we wanted, or there’s a baby yoga class starting up soon (as soon as they have enough people signed up).

For Fridays there’s yet another breastfeeding support group – this one is the main one and is better attended than the others. Or there’s another baby swimming class, or an NCT bumps & babies group. But I’ve just signed us up to a group called Small Talk which runs for the next eight weeks and centres on baby communication. Apparently there’s an opportunity to take part in some research.

There’s not so much on Monday mornings, but there is a baby swimming class. Since this one doesn’t clash with anything, I’m going to start taking Zoe next week, now that she’s had her second immunisations.

Apart from Mondays, I’m keeping the afternoons free for us. But again, there’s plenty we could go to if we wanted to. It’s a bit of a relief though to have some time in the house just to ourselves (and listen to Robin practise the piano!).

One Response to "The social whirl"