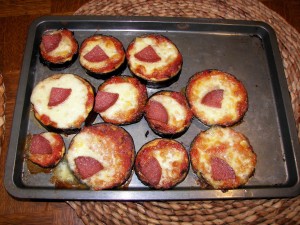 Robin has shared the secret of his awesome aubergine pizzas with me. I suspect it was mainly because he was tired and didn’t want to cook them himself. Nevertheless, I now have the hidden knowledge, and I’m going to pass it on.

This is currently one of my favourite meals. They’re very simple and tasty, but they do take a bit of time to cook. The basic concept is that you use sliced aubergine as the bases for little mini-pizzas, with all the usual toppings on top. The aubergine gives the pizzas an extra savoury meatiness and body, and of course it’s gluten free, wheat free, lacto-paleo, and low carb.

For two people, you need

Roughly chop the tomatoes and then blend them to a slurry.

Heat about ⅔ of the olive oil and fry the garlic for a couple of minutes, then add the tomato gloop. Add salt and pepper to taste.

Bring it all to the boil, then cook on a medium heat with the lid off for about three-quarters of an hour, with occasional stirring.

Meanwhile, cut the aubergines into slices about 1–1.5cm thick. Put them in a bowl with lots of salt and cover them with water for half an hour.

After half an hour, drain and rinse the aubergines and pat them dry with a clean tea-towel.

Lay the aubergine slices out on a grill pan and smear generous amounts of olive oil over them with your fingers. You may not be able to get them all on the grill pan at once, in which case you’ll need to do them in batches.

Grill the aubergines under a hot grill until they are golden brown on top (about 10–15 minutes). Then turn them over, smear the other side with more generous amounts of olive oil, and return to the grill. Meanwhile, cut the mozzarella into slices. Once the aubergines are all done, the tomatoes should have reduced to a thick red oily paste.

Arrange the aubergines on a baking tray (it helps to leave a gap at one end so you can slide a spatula or fishslice under for serving).

Spread the tomato paste evenly over them with a knife, and then top with mozzarella and any other toppings. Bake in the oven for about 15 minutes, until the mozzarella is golden and bubbling.

A simple and very tasty meal!