I’ve mentioned in a couple of posts now that we’ve changed the way we eat. I think it’s time I gave a bit more information.

A couple of months ago, I was recommended some bargains at our local butcher, and we ended up with a big pile of sausages and black pudding and eggs, which we happily had for breakfast over several days. Robin regretted that it wasn’t healthy to eat like that all the time, and said rather facetiously that he wished there was a diet where he could eat steak for breakfast. I said I bet there was; you could find just about anything on the internet. So I went looking, and pretty soon, of course, found a bodybuilding site which recommended you have a steak and some nuts every morning for breakfast. But it didn’t say anything about why, or how it worked. So I kept looking, clicking from blog to blog till I found one that actually explained the science behind it. (There are others that go into a lot more detail about the science, but this one was a good overview and introduction.)

Basically, the idea is that when you eat lots of sugar and starch (which quickly gets broken down into sugar), that quickly gets into your bloodstream, and you release lots of insulin to get it out of your bloodstream before it does any damage. The insulin works very effectively, stimulating your body to package your sugar away into your fat cells, and your blood sugar level drops – too fast, making you tired and hungry again. But when you get more of your energy as fat instead, you don’t get an insulin spike, your blood sugar level doesn’t drop too low, and you upregulate your fat-burning enzymes, enabling you to use your fat stores for energy. So you’re less hungry, you eat less, you have more energy, and you don’t need to snack to keep you going between meals.

The NHS and the Food Standards Agency would have us eat a large proportion of our diet as starch: potatoes, pasta, bread, rice; and keep our fat consumption low. But the latest evidence is that replacing fat with carbs (exactly what a low-fat diet does) increases your risk of heart disease, Alzheimer’s, and a whole bunch of other nasty things. It seems to be far better to keep the carbs fairly low (though not to cut them out altogether), and fill up on protein and fat. In particular, grasses, especially wheat, turn out to be really bad for us and are best avoided altogether.

So for the last three months, we have cut out most starchy food, and almost all cereal-based food: bread, pasta, rice, and most potatoes. We’ve cut out almost all sugar and sweet things: pastries, cakes, puddings, or sweets. Yea, even unto chocolates. And considering that up until now we’d considered cake one of the essential food groups, this is pretty impressive. 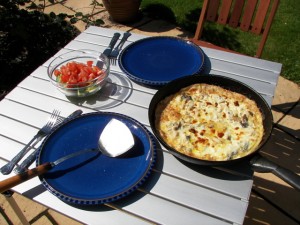 Haddock and cream omelette, with cucumber and tomato salad, outside on a sunny day. Not very many carbs at all.

Instead, we have been eating a heck of a lot more meat and vegetables – hence the posts about needing to source more vegetables. We also get through two dozen eggs a week, to the bemusement of my workmates (a local farm delivers the – free-range – eggs to our office). Cutting down on starch and sugar has given us a lot more room for foods much more rich in nutrients.

We don’t actually eat steak for breakfast: would that we were so rich! We normally have eggs, nuts, some vegetable matter, and cold chicken for Robin and yoghurt for me. (We have not cut out dairy.) Lunches are often salads, and evening meals are generally what we used to have, but without so much starch; so perhaps a roast with extra carrots and fewer or no potatoes, stirfry with extra veg and no noodles, or lasagna with aubergine slices instead of pasta. And no pudding or cake.

Eating like this – avoiding cereal grains and sugar, eating lots of meat and vegetables –  is known variously as the ‘Paleo‘, ‘Primal‘, ‘Caveman‘, or ‘Ancestral‘ diet. I don’t like any of those terms. It may be true that eating like this (for various values of ‘this’, depending on whose blog or book you read) approximates the diet of our fifteen-thousand-times-great-grandmothers. But there’s no way we can know that for sure, nor is the food our fifteen-thousand-times-great-grandmothers ate necessarily the best possible diet for us. The important thing is the science that tells us how our body works, and what to feed it for best results.

Over these last three months of eating like this, we have both lost significant amounts of body fat and become visibly leaner. Our clothes don’t fit any more. And we have a crapton more energy. We’re getting stronger at the gym. We can go between meals – even skip them on occasion – without needing to snack or getting cranky. I’m concentrating better at work. Robin is working longer hours without becoming exhausted.

I should apologise to Robin at this point. For years I’ve been advocating keeping our meat intake low for sustainability reasons. But he in particular is so much healthier on a higher dose of meat that I realise I’ve been holding him back, especially since for the most part we filled up instead on pasta, rice and bread.

It does cost more, of course. Though not as much more as you might think, because we were spending quite a lot of money on Graze boxes and other snacks to keep us going, which we no longer need. And it’s true that most people in the world can’t afford to eat this way, nor could the world support feeding everyone on a diet like ours under our current agricultural systems. There are some things that could be done to change this, however, and we will have to do them eventually. In the meantime, we’ll eat our meat and vegetables as sustainably as we can, because with the results we’ve experienced so far, we can’t go back.

3 Responses to "What we eat, and why"