You are here: Home › Food › Vegetables, and where to get them

We typically spend about £25 a week on vegetables. We’re trying to work out if this lot could cost-effectively be replaced partially or wholly by a veg box scheme. The trouble is that we eat a lot of vegetables, and I suspect that the box scheme will work out more expensive.

What about the garden?, I hear you cry. There’s an extensive vegetable patch, surely that should give us a good proportion of our food?

What about the garden, indeed.

This is how it looks at the moment:

Lots of growth, lots of remains of half-completed projects, not much crop. 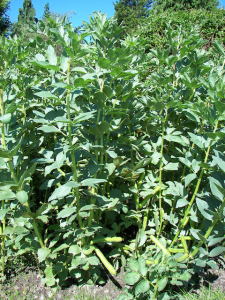 The beans are taller than they’ve ever been, but very few pods, because it’s been too wet for the insects to pollinate them. Variety: Meteor. We usually go for Express, but the seeds we were sent didn’t germinate at all. 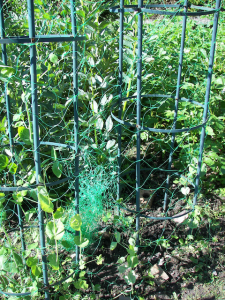 These are meant to be peas. I’ve sown them three times now; only a few have come up. Probably a slug-related disorder. Variety: Alderman, because it’s a full-height pea. Most pea varieties (and beans too) seem to be dwarf varieties, because they crop quicker, but I prefer the tall ones, because they crop all the way up and so you get much more. 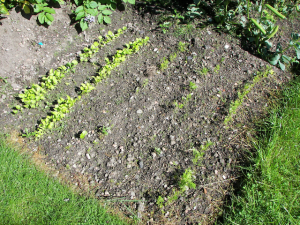 Parsnip and carrot seedlings, in need of thinning. We tend to do quite well with parsnips, though they won’t be ready for months yet. Carrots have always been a bit of a flop, with only a few getting to any size (note the sporadic germination here – and this is the best it’s ever been!) and many of them being infested with carrot fly, but I keep trying. 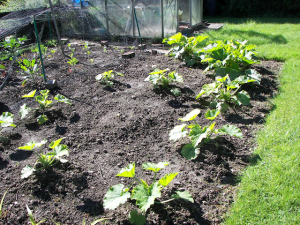 This bed contains courgettes. (Variety: One Ball, because they’re cute and round and very tender and yummy.) They’re just getting going, but again pollination is proving a problem. I don’t know yet whether we’ll get that many of them. Two of them haven’t taken off at all; I’ve sown a catch crop of lettuce in these gaps, but it hasn’t come up yet. 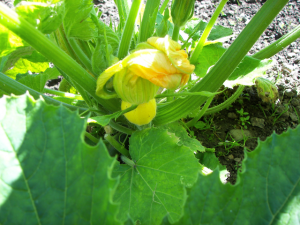 They’re just getting going, but again pollination is proving a problem. I don’t know yet whether we’ll get that many of them. 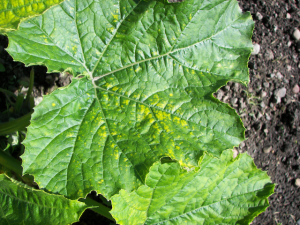 They also seem to be coming down with some sort of mosaic virus. 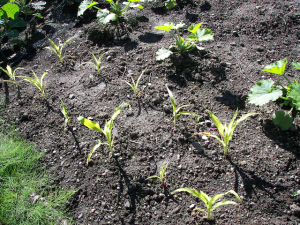 Here we have sweetcorn. I think it’s not the year for it. 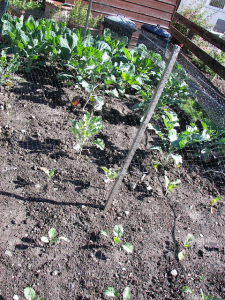 This is our brassica bed. The tall things at the back are Brussels sprouts; in the middle there’s purple sprouting broccoli; the small ones at the front will become Savoy cabbages and winter cauliflower. These will (hopefully) come into their own from about November through to the spring. I don’t generally believe in summer brassicas, because the caterpillars get them. And there’s lots of other vegetables available in summer, but very little other than brassicas (and parsnips) for the winter. 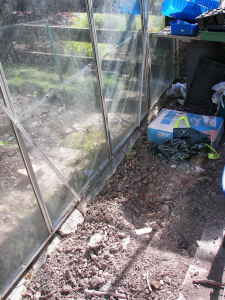 Here’s our greenhouse. Nothing doing here. We usually grow tomatoes, which do well, but we’re leaving it fallow this year because disease was starting to build up. I plan to manure it well in the autumn and see what we can do next year. We did mean to sow some clover to get some nitrogen-fixing going, but we never got round to it, and it’s probably a little late in the season now. 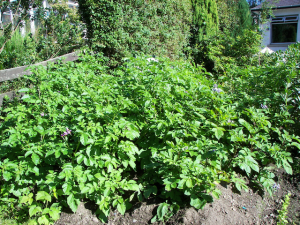 And here… this was a bit of a mistake. We pulled out all our unproductive, slightly bitter, and weed-infested soft fruit, and planted potatoes to break up the ground. Pink Fir Apple and Salad Blue for variety, but most of them were Maris Piper. About a month after we planted them, we discovered some new information that made us change our diet. Now we don’t really eat potatoes at all. But they look like they’re going to be our most successful crop, at least if the leaves are anything to go by. I have no idea what we’re going to do with them all.

So at the moment we’re not really eating anything much from our garden. Which is annoying, because I’ve spent quite a bit of time planting and weeding the vegetable patch,

at the expense of the rest of the garden.

Yet we’re still spending all this money on vegetables.

So the question is: will a box scheme be any cheaper, or at least of similar price?

The big advantage of a box scheme is supposed to be that you get whatever’s in season, so you get the best veg available for the time of year. And I quite like the idea of the extra variety and adventure of not knowing in advance what you’re going to get, though Robin, who is, to be fair, the cook most of the time, prefers to be able to decide and plan. But certain things are non-negotiable, and certain things just won’t come in a box scheme because they don’t grow locally. We will always want avocados, because we have them for breakfast; we will always want large quantities of tomatoes; we will almost always want peppers – or at least I will; Robin hates them. So we’ll still have to buy some things at the supermarket.

I also have no idea how much you get in the box scheme. The website promises, aside from a standard quantity of potatoes (which we will refuse), carrots, and onions, a ‘variety of seasonal veg’. Obviously they can’t give more details because the available crop will vary from week to week. The Medium box is supposed to be suitable for 3 or 4 people, but is this 3 or 4 people who eat one vegetable per meal, or two or three as we do? If this is anything to go by, it wouldn’t be enough.

5 Responses to "Vegetables, and where to get them"