You are here: Home › Uncategorized › We went to see the Queen

Today the Queen came to Perth as part of Royal Week in Scotland. She was given the keys to the city (now that we are a city again) and Prince Philip was granted the Freedom of the City, which I think means he can come here without being arrested, or something. 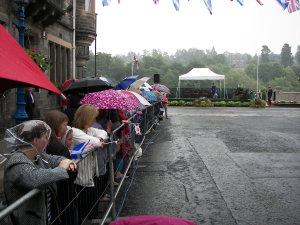 This is the view we thought we were going to get.

Robin and I turned out for it, setting off early to be sure of a place near the front. We could have gone for a decent view off to the side, but I thought we could go for directly in front of the dais. And at the start it looked like a very good spot indeed.

Some workies were sent up in buckets to loosen the flags, which had become very tangled.

We stood for a long time. The weather stayed dry except for one brief but heavy shower near the start, when this picture was taken. We were then treated to the sight of a dignitary in tailcoat with red trim wielding a mop to wipe down the dais. The flags across the top of the street also needed unwinding. 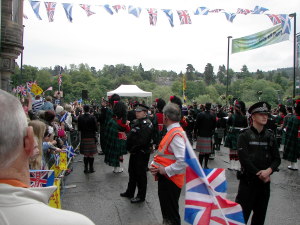 This is the view we actually got once various regimental bands and officers and stewards and police officers turned up. You can just see the Queen arriving on the platform.

Then the military bands, pipe bands, and various other officials and groups arrived (there was running commentary on a PA system; when there wasn’t anything much going on we were treated to highlights of the history of Perth) and we lost our perfect view. (I’d like to note in passing that the Royal Archers have a tremendously silly uniform.) However, Robin could still see quite well, and I could see as long as the police sergeant leant forward and not back. She looked no bigger at that distance than on a TV screen on the news. 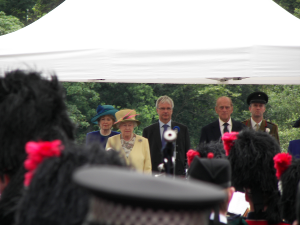 The Queen must surely be quite sick of the National Anthem.

The speechifying was quite short – the Queen got her keys (though I assume she had to hand them back again afterwards) and Prince Philip got his freedom. 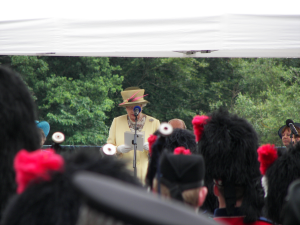 Her Majesty giving her speech. I could see her whenever the police sergeant swayed forwards.

In the Queen’s reply speech (how important Perth was, wasn’t it good we were a city again, she remembered being here before) I thought she sounded quite tired. She must be having an extremely busy time of it, poor woman. And it must be hard to keep looking enthusiastic at event after event.

As soon as her speech was over the band played a tune, then she and Prince Philip got straight into the car and onto the next engagements: a visit to the Black Watch; Perth college; and, finally, lunch at Scone Palace (you can probably hear the sigh of relief). We were quite glad to get away; the crowd near us was beginning to turn a little fractious, with accusations of pushing in and ‘We were here first!’. We walked home through the South Inch, and saw a heron that has taken up residence on the pond that used to be the boating lake.