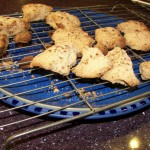 In an attempt to expand our repertoire of dairy-free cakey things (which also includes carrot cake, banana cake and, erm, that’s it) Robin found a recipe for cinnamon biscuits in The Silver Spoon and persuaded me to try it. The ingredients: plain flour, sugar, lemon rind, and cinnamon to sprinkle on top. And olive oil.

The instructions said to mix the ingredients (apart from the cinnamon), which I quickly found had to be done by rubbing as for a crumble. The mixture was very fine and powdery: from the bit where it said to form it into balls and flatten slightly by pressing on top, I was expecting it to get sticky and doughy, but it never did, even after leaving to stand for the required 20 minutes, and even after adding extra olive oil. This doesn’t appear to have been a mistake in our interpretation of the recipe; we found that someone else had had the same problem.

So we formed it into balls by grabbing fistfuls and squeezing, and then putting the results very gingerly down on the baking tray before they fell apart. (Nor did the recipe specify what size the balls ought to be, or how many we should expect to get from the mixture, so we ended up with a highly varied mix of sizes.)

After 20 minutes in the oven, they had solidified in their shapes and were going brown at the edges, particularly where they were thin and pointy. So we took them out and tried them hot.

Absolutely delicious: lemony and cinnamony with a little extra tang from the olive oil. Firm enough to hold and take a bite out of, but crumbly and melting in the mouth.

They don’t keep well: the next day in the tin they’d turned into rock cakes requiring canines and pre-molars to get a bite out of them (but still very tasty rock cakes). We’re going to try again sometime, and we’ll try and make them a bit lighter (and reduce the problem of the biscuits crumbling apart) by using cupcake trays as moulds, pressing the mixture down very lightly.