Faith’s been asking for boots for a while now, and to be honest she’s got a point. It’s quite wet and puddly around here and we go down quite a muddy lane from our house to get to the nursery. So we went shopping this afternoon, and hit This Little Piggy first, with the intention of going on to Clarks afterwards if necessary. But Faith immediately spotted these and loved them. They were fairly flexible so I was pleased, and the assistant tested the fit and then added an insole to adjust it better. So good service and I liked the price too. 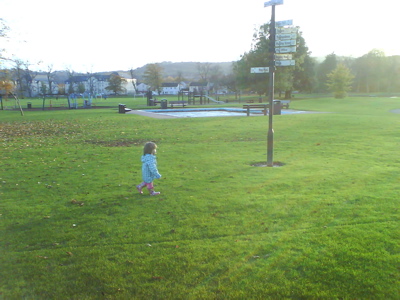 It was all over so much more quickly and painlessly than I’d feared that I suggested we try them out in the nearby park. Faith loved this idea, of course, and went haring off in her wellies over the grass, crying ‘Happy!’ and got to the bit by the duckpond where the grass gives way to tarmac. At that particular point, just on the join, there was quite a wide puddle. She stopped at the edge and looked at me. I said, ‘Yes, you’ve got boots on, so you can go through the puddle if you like, that’s what they’re for.’

On the first step she sank in up to her knees. On the second step she stumbled forwards and fell flat on her face.

I fished the poor thing out with much apology. She was soggy and covered in muck — the puddle had been filled with dead rotting leaves (which had made it look much shallower than it was) with that lovely decomposing smell. I had spare pants, trousers and socks with me in case of another sort of accident (which did not occur), and of course she still had her shoes, but nothing for her top half. Fortunately her coat had protected her jumper and shirt from most of it. She said ‘Sad’ and ‘I’m very sorry’ (by which she meant that I was sorry — she hasn’t quite sorted out her pronouns yet) and ‘Mummy’s sad’. But after I’d put her clean clothes on her and reassured her that I was happier now that she was dry again and pointed her in the direction of the swings, she cheered up and said ‘Mummy’s happier. Ffaiff happier.’

So she played on the swings and slides for a bit and then we saw the moon, which made her day all over again. She loves the moon and chased across the park towards it, crying ‘Have it!’ I never realised children did actually literally ask for the moon!

One Response to "New boots"