You are here: Home › Thoughts › Scientific experiment: How hot is our fire?

Robin and I have been wondering whether Gandalf was correct in saying that not even ordinary gold would melt in a domestic fire. The melting point of gold is 1064ºC, but we couldn’t find any temperature values for a coal house fire on a quick search, so we’ve been experimenting with our own.

Robin has a tendency to add random things to fires to see how well they burn. Over Christmas he dropped in an aluminium mince pie tray, which melted, so we know that the fire must be at least 660ºC.

Obviously we’re not sacrificing our wedding rings to the flames, but we rooted out a 1980 two pence piece which is made of bronze – mostly copper, which has a melting point of 1084ºC, just 20ºC above the melting point of gold. This, lowered gently into the fire on one arm of our fire tongs and placed on a hot coal, acquired a gentle purple corona after a couple of minutes, and we began to taste metal on our tongues. We think this was all the dirt it had acquired over the years (rubbing against other coins and in people’s hands) burning off, as after a couple more minutes it went away again. 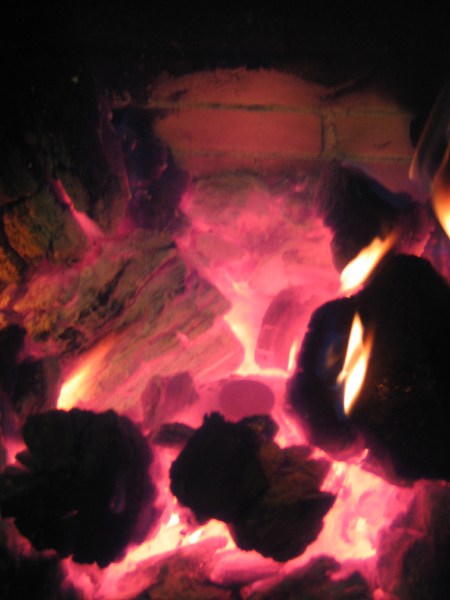 The fire actually looks a lot more orange and less red than this to us, but I guess the camera knows what it’s doing.

We left the coin in for about twenty minutes and then extracted it and left it a few minutes to cool before washing it in water. There is some black pitting (probably embedded coal dirt) and the embossing has lost some of its detail (Her Majesty in particular is a lot less distinct). But it’s basically intact. So I guess it’s true that no gold ring would have burnt in Frodo’s fire, especially since his would have been a wood fire, which wouldn’t burn as hot as a coal fire in any case.

The only element we have access to with a melting point between gold and aluminium is silver, and we don’t plan to sacrifice any of that either. So in the absence of specialised thermometry, somewhere between 660ºC and 1084ºC is where we’re going to have to leave it.

2 Responses to "Scientific experiment: How hot is our fire?"