You are here: Home › Zoe › Zoe and the potty 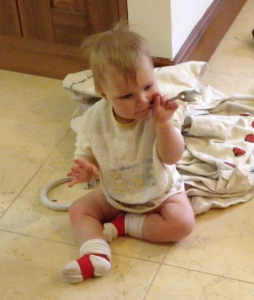 Most articles about babies and potties show a picture of the baby on a potty, but I find Zoe prefers her privacy (walking out of the room is a fairly sure-fire way of getting her to pee!). So here’s another picture of her without a nappy on.

Astute readers may have noticed that in some recent photos Zoe hasn’t been wearing a nappy.

Zoe’s never much liked having a soggy nappy, and over the past few months I’ve been giving her more and more nappy-free time. This article about how babies walk better without a nappy on encouraged me further.

Then one day about two months ago I could see that she was about to poo, and thought ‘Why not?’ So I ran to pull the potty out of storage. By the time I came back with it of course she was mostly done, but I picked her up and held her over the potty, the poo fell in, and I praised her mightily for pooing on the potty!

Since then I’ve tried to offer the potty fairly often, and she’ll frequently oblige. Too often, though, and she gets cross!

It took only a couple of weeks for her to lose the habit she’d developed (supported by nappy wearing) of doing tiny, frequent dribbles, and start instead to wait till her bladder was full before going. Now she can even sometimes hold in until we get to a toilet or potty if there isn’t one immediately available, though she’s still fairly unreliable at this. (She also knows not to pee on people, though again sometimes can’t help herself.) A couple of weeks ago we were out shopping when she suddenly started grabbing my face with a look of urgency. I took her to the toilets in the nearby shopping centre, where she immediately did a great big pee!

Early pottying is a thing that I vaguely knew about before Zoe was born, and it seems to be on the rise. There’s even an app for it. I assumed it would be too much work – even though Faith also took to the potty young. But some people start pottying from birth. Apparently it works as the baby never gets used to peeing in a nappy so doesn’t have to be trained out of it again. Starting with an older baby, as we have, is harder, but it seems to be going pretty well for us.

I think on the whole she signals about eighty percent of the time, of which we correctly identify about sixty per cent (and act on it in time a bit less). So we’re catching about half her output. I can fairly reliably catch a pee and/or poo by offering her the potty immediately after she wakes from sleep, and she often gives us That Look in the middle of a meal (sometimes before, often just after, she’s actually done a pee). She’s even doing well at nursery, though in addition to peeing on the toilet she also manages to get through a lot of nappies.

This isn’t about potty training. We don’t expect her to think of the potty as the place to pee for a good while yet. But she definitely knows that the potty is a place where she can pee, and it’s very encouraging that she can tell us when she needs to go, even if we still don’t understand her a lot of the time. Not much saving on washes yet either, because while we’re going through fewer nappies on her at home, they’re made up for by more flat nappies on the floor. But she’s happier with less nappy rash, and I have less bum-wiping to do!

One Response to "Zoe and the potty"