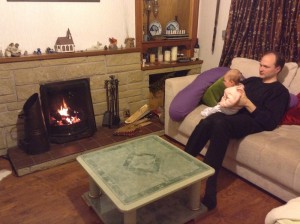 Zoe and the fire

Zoe is beginning to develop a real independence of spirit. Yesterday she was kicking and wriggling on the sofa, and Robin offered to pick her up. She indicated quite clearly, but politely, that she would rather continue to lie on the sofa for a while longer.

She’s also been napping better the last couple of days. I suspect what may have made the difference is that instead of just putting her down when she’s asleep, I tell her when I see her beginning to go to sleep that I will put her in her cot [or wherever] when she’s very sleepy, so that she can sleep more comfortably. Thus it doesn’t come as a surprise to her and if she does rouse as I put her down she’s much more likely to go back to sleep again. She hasn’t yet got the hang of napping for more than one sleep cycle, but even so I’ve been getting a couple of 15–20 minute periods for showering, dressing, and eating!

Today we ‘read’ That’s Not My Dragon. She spent a long time exploring the contrasting textures of the front cover, and then opened the book herself. She’d seen me do that previously with this and other books, but not in that session.

She also spent quite a long time looking at Two Red Fish, a large and high-contrast picture on our wall: bright red fish on a blue and white background. There’s another piece of artwork she particularly likes: an embroidered wallhanging we brought back from Thailand, with a Chinese dragon picked out in white beads on a black velvet background. Again, it’s large and high in contrast. She will gaze at either of these pictures for a considerable period of time given the opportunity.

And this afternoon we lit a fire. She watched it being lit, and gazed very intently at the flames.

One Response to "A mind of her own"