You are here: Home › Food › The harvest begins 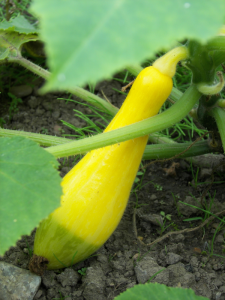 Zephyr F1 courgette. One of very many!

The courgette season is upon us. Hooray!

I sowed more courgette seeds than usual this year, to make up for growing fewer types of veg. Most of them came up. So now we have about fifteen plants in three different varieties, all producing prolifically. In previous years we might have struggled to get through them all, but now we’re eating a lot more vegetables it’s much less of a problem.

There are three plants of the variety One Ball F1, which we’ve grown and enjoyed for the past several years; and six each of Zephyr F1 and Genovese F1. I chose Zephyr for its appearance and Genovese for the promised taste, but I have to admit to finding the Genovese a little disappointing. Zephyr is much tastier, though the unusual pattern does get rather lost in most cooking methods!

I recently came across this recipe for courgette hummus – thanks Annabel for the link! – which, being translated, is as follows:

In a mixer, blend the courgettes, tahini, lemon juice, and seasonings. Once the mixture is creamy, slowly add the olive oil while still turning the mixer. Keep turning for a few more seconds for a nice unctuous hummus.

Serve powdered with paprika and cumin, with crudities and cracklings.

I didn’t do the last thing; I mixed the paprika and cumin right in to the slurry, considering them to be seasonings.

It turned out rather runnier than I would have expected for hummus. Perhaps the courgettes I used were more medium than small? In any case it made a great thick salad dressing.

One Response to "The harvest begins"