Dad had dropped a strong hint that he would like some Stilton for his birthday, so we went looking for a good cheesemonger. We learnt of one in Dundee that stocked Colston Bassett Stilton –  a very good Stilton indeed – so decided to pay The Cheesery a visit. We could treat ourselves to some decent cheese at the same time. And, while we were in Dundee, we thought we’d also check out an Asian supermarket – Matthews Foods – which we’d discovered online a while back, and stock up on any Thai ingredients we could find. (We also wanted duck gizzards; we’d recently bought a delicious duck from Gartmorn Farm at the farmers’ market, and the giblets came with a gizzard. We’d found a recipe for Chinese-style duck gizzards but it required several of them, so we wanted to top up what we had.)

Last time we went shopping in Dundee we had our credit card details stolen. That was a few years ago now, but Dundee hasn’t exactly endeared itself to us. Nevertheless, for the sake of good cheese and Thai food, we were prepared to give Dundee another go.

We’ve also been grumping for a while about the lack of a large high-end supermarket in Perth. OK, there’s the M&S, but it’s a small shop in the centre of town with no parking: mostly given over to clothes and the food hall is, to be honest, mainly ready meals. Sainsbury’s has recently had its application granted for a new superstore off the bypass (near the existing Tesco), but it’ll be a few years before that opens. We knew there was a Sainsbury’s in Dundee somewhere, so we thought we’d round off the trip by doing our weekly shop there instead of our usual Tesco.

The Cheesery turned out to be a small, friendly shop a little bit off the main shopping area in Dundee. The staff obviously knew their cheeses and were happy to give us some (delicious) slivers to taste – and tied a ribbon round the birthday Stilton! A very successful trip and we may well be back for more. 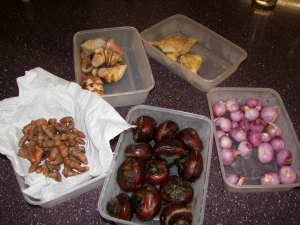 Some of the nommy things we got from Matthews Foods. Clockwise from left: turmeric, galangal, young ginger, Thai shallots, water chestnuts.

Matthews Foods was rather dingy but had a good selection of stuff that’s hard to come by, including a lot of the fresh Thai spices that are usually only available dried or powdered: galangal, turmeric, young ginger; and vegetables such as morning glory which we’ve never been able to find in the UK before. No duck gizzards though, and no straw mushrooms, and no shrimp paste. (But that was ok; we had some shrimp paste, albeit rather elderly, in the fridge already.) Still, we came out with a lovely selection of things. We’ve already eaten tom yum soup, green curry with chicken, and a pad-thai-inspired stir fry with morning glory. And I’ve planted up some of the root spices in the hopes of growing our own. (Not that I’m expecting a great harvest, but the plants are rather pretty.) We’ll definitely be back here too. 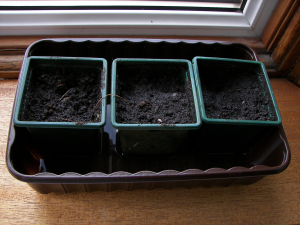 We then drove out to where we thought the Sainsbury’s was, only to find we had misremembered. We had reached Tesco. And we almost went home, to do our weekly shop in the usual supermarket. But we decided that since we’d come to Dundee we might as well find the Sainsbury’s.

It was on the other side of town. We found it with some consultation of the road map. It looked rather small, and rather old. The advertising banners had faded from orange to pale yellow.

Sainsbury’s positions itself towards the higher end of the utility shopping market. Accordingly, we were expecting higher quality produce. What it actually appears to mean is that everything comes in smaller packets. (Rich people presumably don’t have families.) Fresh vegetables are more highly processed: more outer leaves cut off the cabbages, everything bagged up in plastic. I looked for spinach but only found small bags of baby leaves in the salad section.

In the meat section, you could get small trays of expensive organic chicken pieces, or large trays of ‘Freedom Food‘ chicken (which as everyone knows isn’t really free range at all, though it is better than nothing), but nothing in between. The fish counter had a few very sorry-looking mackerel with sunken eyes. We bought the only two tuna steaks on display; when we got them home and cooked them, they were dry and flaccid. We bought a bottle of wine that was marked down to half price; on drinking it we discovered it wasn’t even worth that.

We had spent rather more than we normally would, for less food of lower quality. We had to go to Tesco after all, to get the meat we were looking for.

I don’t know whether to blame Sainsbury’s or Dundee for this. Perth is a richer town, and maybe a newly-built, larger Sainsbury here would have a much more satisfactory range of stock. But I’m less convinced than I was that a new Sainsbury in town would really increase our shopping options.

In the meantime, we’re looking into a veg box delivery. We’ve considered them before – they may well work out cheaper than supermarket veg, as well as giving us more variety and being less wasteful. But we always worried that, since we grow our own vegetables, we’d just end up with even more of a glut of whatever we’re producing at the moment. Now that we’re eating a heck of a lot more vegetables, this isn’t so much of a concern. But most veg boxes (including Bellfield Organics, the only scheme that seems to actually deliver to Perth) include a big whack of potatoes, which we don’t want.

(We’re not necessarily keen on organic vegetables. Unlike organic meat, where you get reassurance that the animal has been treated well, organic plant material seems like a bit of a gimmick, adding to the cost without giving a substantial additional benefit. But locally grown, seasonal, unprocessed vegetables are very much worthwhile, and it might be worth going organic to get them.)

I’ve emailed Bellfield Organics to ask if they’d be willing to swap out the potatoes for other veg, and they say they are. So maybe next week we’ll give them a go.

Now all we need to do is find someone who’ll sell us lots of duck gizzards.