You are here: Home › Food › I have made yoghurt

I appear to have made yoghurt. It’s runnier and not as sweet as its parent, but still nice!

I started last Saturday, with a half-litre of milk we’d bought for a recipe, used 100ml and had no plans for the rest. I was just finishing off a pot of yoghurt (I have yoghurt every morning with my breakfast, usually Yeo Valley which we buy in the big 1kg tubs), so I reckoned I’d try pouring the milk in with the remains of the yoghurt and see what I could get.

I left it out on the counter for a few hours, at which time it was seemingly unchanged. So I left it overnight. The next morning it was beginning to taste a little sour. I left it another day. Now it was definitely tasting sour, still very runny, and not at all like yoghurt. In fact, it tasted more like cheese.

At this point I thought to look up how to make yoghurt, and discovered I’d been doing it all wrong. Apparently you’re supposed to heat the milk to foaming point and then cool it again, to denature the proteins, before you add the culture. Then you’re supposed to keep it at 45℃ or so for a few hours. I didn’t do any of that.

So I reckoned that was that for the yoghurt. Oh well, it tastes a bit like cheese; let’s go for cheese instead. (I had a vague memory of someone saying they’d made cottage cheese from milk that had curdled, just by straining the curds out of the whey.) So I left it out on the worktop for a couple more days, checking regularly. It seemed to be getting more solid, and separating out a bit. But on Wednesday morning I knew I’d be too busy to check it for the next couple of days, so I put it in the fridge. On Friday evening I checked it again. Well what do you know? Yoghurt! 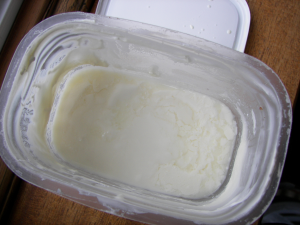 Yoghurt after four days at room temperature and five days in the fridge, before stirring

It had separated; there were definite thick bits and clearer bits. But it tasted like yoghurt; maybe a little sharp but definitely yoghurt. And once I’d stirred it it took on a texture pretty similar to the commercial yoghurt I’d used for the starter culture, albeit thinner. 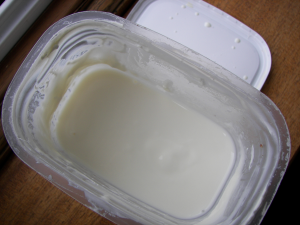 I had a spoonful for breakfast yesterday morning, mixed in with bought yoghurt, and I didn’t die. In fact I had no ill effects whatsoever. I increased the proportion to two spoonfuls this morning, and this also doesn’t seem to be poisonous (and did taste nice). So tomorrow I think I’ll have just the home-made stuff on its own.

I don’t know yet whether I’ll do it again. I like the idea of making my own yoghurt, simply for its own sake, but I’m not convinced it’s much cheaper – especially once I start adding cream, which some people suggest – nor that I can get better results. (The instructions I’ve found are mostly American, which probably reflects the greater difficulty of getting hold of decent natural yoghurt over there; not so much of a problem here.) I do prefer a thicker yoghurt, and I gather that home-made stuff is usually runnier than shop-bought – though cooking the milk might help with that. On the other hand, the home-made stuff should have more nice bugs in it.

But I did enjoy the triumph of discovering that it had actually worked. If there is a next time, then I think I will heat the milk and warm the culture, though I will probably need to acquire some means of keeping it warm (a thermos flask maybe?). Or I might go the kefir route.

And at some point I’d like to try making sauerkraut.

One Response to "I have made yoghurt"