You are here: Home › Faith › Weekends

Two weeks ago Robin and I spent a night away from Faith for the first time. We had my parents to stay at our house to look after Faith on Saturday night, while we took ourselves off to a nice hotel in Glasgow (location chosen because of the presence of Robin’s favourite restaurant, hotel chosen because they had a good deal on a room with a king-size bed). The grandparents came on Saturday morning, and we left after lunch. Faith looked sad but resigned to see us go, though she was very tired at the time (just before naptime). She apparently had great fun with her grandparents while we were away, and we had a good relaxing afternoon and evening.

Last Sunday we took Faith to Blair Drummond Safari Park, along with Faith’s aunt and cousin. Faith was particularly impressed with the llamas in the petting farm. 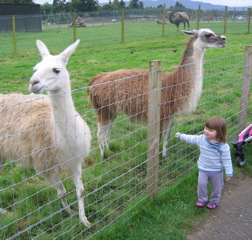 We also saw the sea-lions perform — they really do balance balls on their noses! — and took a boat ride to see the chimpanzees on their little island. (Faith learnt the word ‘chimp’ — up till now she’s been saying ‘ape’). Then we drove around the safari section and saw elephants, lions, African cows with huge horns, rhinos, and camels, amongst other creatures. Faith very much enjoys looking at the programme booklet we bought, and the photos we took, and keeps saying ‘rahri’ (safari) whenever we get into the car in the hopes that we’ll take her back there! We will have to one day, as there was a lot there that we didn’t have time to see.

This weekend we have been mainly spending looking at kitchens. Our oven suddenly died a few days ago (we can grill but not bake), and the hob has been dying for a while, with one of the rings now unusable. Our dishwasher is unreliable (about half the glasses come clean about half the time), our fridge is falling apart (and too small), and we’re fed up of going into the garage whenever we want to access the freezer. On top of all that, we have been feeling for a while that the kitchen is ugly and not best laid out. The colour scheme has really shrunk on us since we’ve been here, there’s an ugly gap either side of our cooker because the space is slightly the wrong size for it, and the corner cupboards are not that easy to get into.

So we’ve decided that we need a new kitchen. We took Faith round B&Q a couple of days ago and she had great fun opening all the cupboards and drawers, but the novelty seemed to have worn off a bit this morning when we took her to Magnet. But she still kept saying ‘Chitchen. Chitchen. Buy it!’