You are here: Home › Faith › More fun with food

Faith is six months old today!
On Tuesday Daddy made dinner – a sort of mashed potato bake thing with aubergine and chicken – which she was very taken with and fed herself with a loaded spoon very nicely. 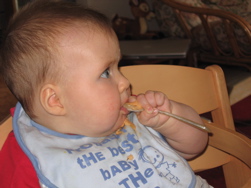 Recipe for Robin’s All Age Gloop No. 1
A nutritious and delicious gloop suitable for adults and babies, perhaps not the healthiest though….

Slice the Aubergine, sprinkle with salt, leave to stand 10-15 mins, then turn over, sprinkle with salt and stand. Then rinse off well. While this is happening peel the potatoes, chop small and boil in plenty of water (salted if you feel that way inclined), until soft then drain, mash and put to one side. Microwave the aubergine slices for 1-2 minutes until soft (or steam, or even boil them, just get ’em soft), when they’re soft chop them into cubes maybe half a centimetre big.

Melt the butter in saucepan, add the garlic and fry for a couple of minutes. Then add the chicken, rosemary, soy sauce, and tomato puree, fry some more for a couple of minutes stirring occasionally (yes there should be quite a lot more butter than other ingredients at this point). Add the aubergine, fry for a bit more, stirring occasionally (the aubergine should soak up some of the butter, but there should still be enough butter for it to be a bit liquid still). Then add the cream and parmesan, season with pepper (there’s probably enough salt from the parmesan and soy, if in doubt taste and season – unless feeding it to babies, who can’t tolerate a lot of salt) and bring to the boil keeping it well stirred and simmer for a bit, with more stirring.

Pour the sauce into the mashed potatoes and mix together well adding milk to make it soft, then spread the mixture out into a flattish, ovenproof dish. Bake in the oven for 15-20 minutes until it’s a nice orangey brown. Serve immediately, allow to cool before feeding to babies.

We cooked some pork rind with it, simply because we had some. Faith didn’t get any of that! We cut it into centimetre wide strips with a very sharp knife or cleaver, sprinkled it with salt and arranged it on top of the bake. We also had the oven rather hotter than suggested above (on maximum, in fact) to ensure that the rind went nice and crispy.

And here’s a photo of her first ever food: the pear she snaffled off me last week. 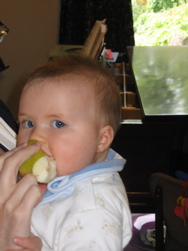 Last night at dinner a slice of avocado and a small piece of bread and pate were very much appreciated. She’s also enjoyed pineapple pieces (again, she saw me eating them and let me know very emphatically that she wanted some). Banana’s been less successful: I think it was a little too ripe because she just mushed it up in her hands and got frustrated. Roast chicken ditto, possibly because it was too dry. She’s also been drinking lots of water.

She prefers it when I hold the food in my hand and she directs my hand where she wants it to go, as with the pear, or at least that I hand her the food rather than just placing it in front of her. I’m assuming that she’ll move on to picking the food up off the table herself soon. Still to come: squash, sweet potato, cucumber, steak.