You are here: Home › Uncategorized › We’re getting a cat! 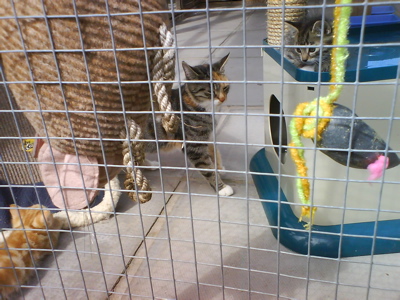 This is an appalling photo, but the adult cat in the centre of the photo is the cat we are going to take home in a couple of weeks’ time (photo also shows two of her six kittens). We visited her today at Arbroath Cats Protection League, who have been keeping her while she rears her kittens. They’ve now been weaned and will all go to their new homes shortly.

She’s rather unfortunately named Kitkat, which would not have been our choice. But she’s beautiful and a very self-assured and friendly pussycat, and we’ll be getting her once she’s been spayed, immunised, and otherwise vetted (and once the decorators have finished repapering in our house). There’s a danger we might not be able to keep her, as Robin’s somewhat allergic to cats, but we’re hoping that as she’s a very neat and non-shedding cat he won’t react too much to her.

We’ve also been recommended some stuff called Petal Cleanse, which appears to be a sort of fur conditioner that reduces the production of allergens. Whether it works by making the fur cleaner so the cat doesn’t need to lick herself as often, making the skin less flaky, making the fur taste nasty so that the cat doesn’t want to lick herself as often, or simply encouraging the owner to brush the cat thus removing the shed fur from the coat, I have no idea, but it seems like being worth a try.